You can ask any number of people for their opinions on white space, and you’ll get a different take from all of them. In fact, to test that notion, we asked three contractors — who happened to be in our offices for some renovation work — if they’d give us their opinions of the layout for this post. This is what transpired. 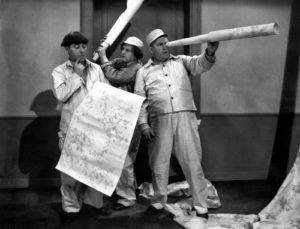 Moe: There’s not enough white space.
Larry: There’s too much white space.
Curly: What’s white space?
Larry: White space is what you hear when nobody’s talking, Puddin’head.
Moe: Who asked you, Porcupine?
Larry: But Moe, I …
Moe: Quiet. Well, what do you say, Chucklehead?
Curly: I still don’t know what white space is.
Moe: Why don’t you get a toupee with some brains in it?
Curly: I’m a victim of soicumstance!

We rest our case.

Given the number of divergent opinions on white space, to say nothing of the confusion running rampant on the topic, we had a flash of entrepreneurial inspiration (no one was hurt): If 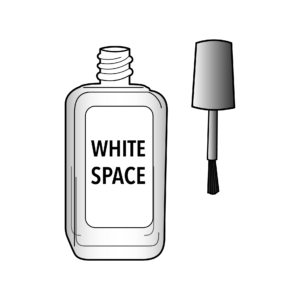 we were halfway enterprising or had at least an ounce of initiative (we determined), we’d bottle and sell the stuff. And that’s exactly what we did.

We realized that would give every would-be graphic designer the ability to apply white space, however liberally or sparingly, wherever he wanted to. And it also would allow the real hacks to completely obliterate whatever portions of their designs they didn’t like and start all over again with a clean … well .. white space.

We even went so far to package our white space with a handy applicator brush. That would allow the messier members of the ersatz design community to be about their creations with no muss, fuss, mess, or bother. It also would give those folks who decided, mid-design, that they were better suited to being painters than graphic designers to artfully eliminate all evidence of their ill-fated designs with up strokes, down strokes, side-to-side strokes, or — for the truly avant-garde — a combination of all three.

Most important, it would make white space a commodity, which is what everyone who knows nothing about white space or what they’re talking about — but who won’t let either of those facts give the slightest pause to their pontificating — imagines white space to be anyway. (“Hey! Joe Bob! Since you’re running over to Walmart, pick me up a couple o’ cases o’ white space, will ya? I think it’s in the aisle right between your fishing gear and your beef jerky, right next to the Liquid Plumber and the denture cleaner. Yeah. Don’t worry. I’ll pay ya back.”)

If our bottled white space doesn’t sell, maybe we’d all be be better off following the advice of Thomas Carlyle:

Know what thou canst work at; and work at it, like a Hercules! That will be thy better plan.

At the very least, it’ll keep us out of each other’s space, white or otherwise.